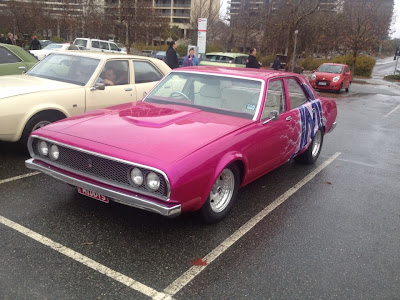 On a wet Canberra morning over 100 people gathered in the carpark opposite Lakeside Rydges Hotel before setting out on a run to Gundaroo, via Honeysuckle Creek and Tidbinbilla. This replicates the Press Run from 1973 when Leyland introduced the car to the motoring media. 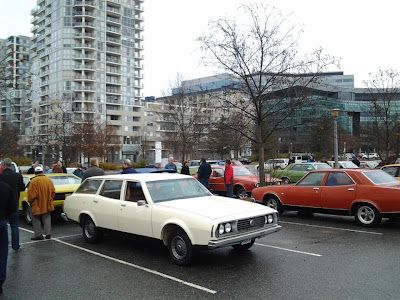 The only Leyland P76 Station Wagon. Driven down from Sydney on Friday night, I don't think it has ever been in the rain before! 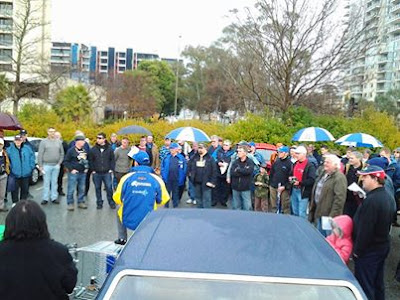 Event Marshall Andrew Griffith from the NSW P76 Club, addresses the rally participants with instructions and last minute pointers, minutes before setting off.  David Lee from the ACT Club is in the lead car. 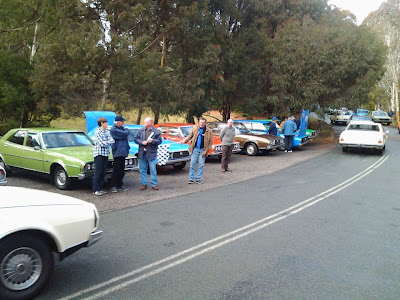 Honeysuckle Creek - Stop One! The Leyland P76 Wagon had some points issues and the party broke into two groups after this. 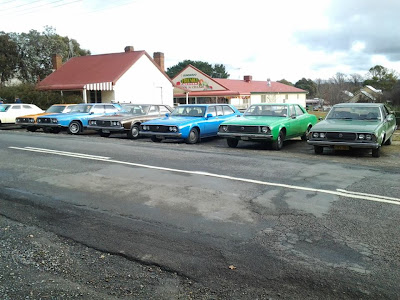 Leylands in Cork St Gundaroo NSW. Over 50 cars and many hungry Leyland fanciers in the Community Hall chowing down on a lovely BBQ put on by the Gundaroo RFS. Many thanks to the warm and friendly people in Gundaroo. 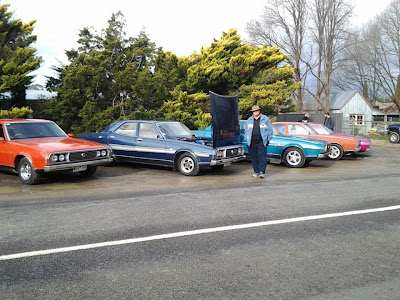 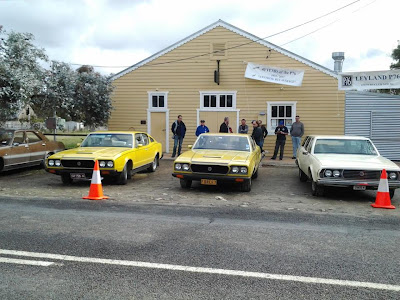 Two Force &'s and Tony de Lucas V8 Super - the only car attending the event that was at the original 1973 press launch.  Fortunately the rain had moved on and people could wander around peering under bonnets etc. 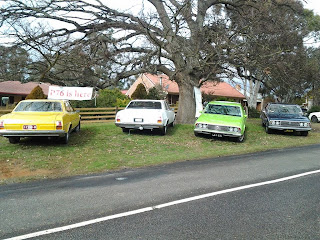 Thanks to Adrian Spencer and Mick Le Coq for the photos.
Posted by D.C. Haas at 5:41 PM 1 comment:

Itinerary for the 40th Anniversary of the Leyland P76 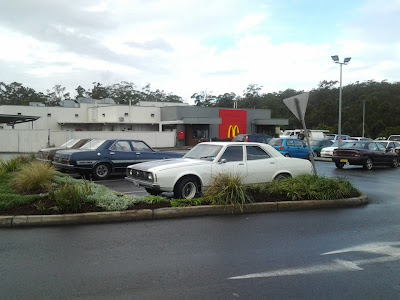 Leyland owners are on their way to the nations capital to enjoy a great weekend celebrating the 40th Anniversary of the Leyland P76 sedan.

The Event Itinerary is now online for all to download and peruse. It contains times and maps for people to use. Registered participants will be handed a copy prior to the Gundaroo Press Run Recreation on Saturday morning (if they haven't already collected a copy from the unofficial dinner at the Ainslie Football Club). 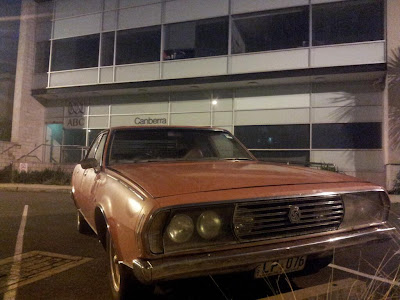 Here is my lovely Bitter Apricot 4 speed V8 Super Leyland P76 in the carpark of local ABC Radio where I had the opportunity to talk to radio presenter Ross Solly at 6.45AM... 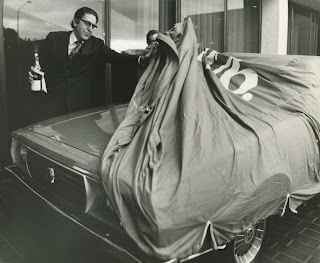 Minister for the ACT Kep Enderby unveiling the P76  at the National Press Release.

The birthday has received wide media coverage, including one of our club members and his car in the Canberra Times. 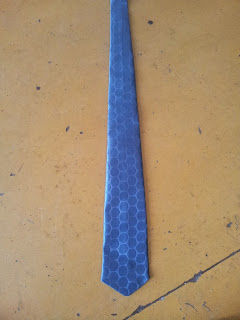 There are some people who love their Leylands, in fact they love them perhaps a little too much. Today we offer you one example - a necktie made from Casino Blue Executive interior material. This was made specially for one of our amigos known to all as the 'Motor Gnome'. I'm advised this is the only tie he owns and has been commissioned especially for the formal dinner at the 40th Anniversary Dinner on Saturday night. No, I don't know why the tie is on his garage floor, I suspect its where he does his ironing.

See you all on Saturday!

For philatelists and Leyland fanciers, Australia Post has a double treat in store for you in July 2013. They are releasing the second series of their 'Road Trip' stamps, and the 2013 issue features a Peel Me Grape P76 on a stamp and a first day cover. 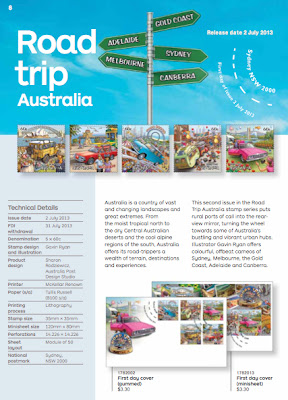 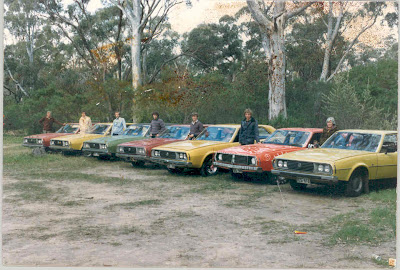 The Lee family and cousins

The organising team for the 40th Anniversary of the Leyland P76 Event have been working away finalising the book that is being published for registered attendees. I'm confident that people will be very pleased when they read it. The book wont be sold, you can only get a copy by registering for the event.

Sadly, limited space and too much material means some things cant be included. This photo from ACT P76 club member David Lee is, one of those things. However, it's a great story so I shall tell it here: 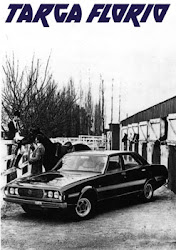 D.C. Haas
"An on the go guy whose desire for adventure knows no boundaries. he's a jet setter who makes the action, then moves on before the crowd arrives." Management Consultant, Public Transport Activist, Motoring Enthusiast, Reader, Writer, Thinker, Agitator... If you want to contact me, you can email me at dchaas67 at gmail dot com